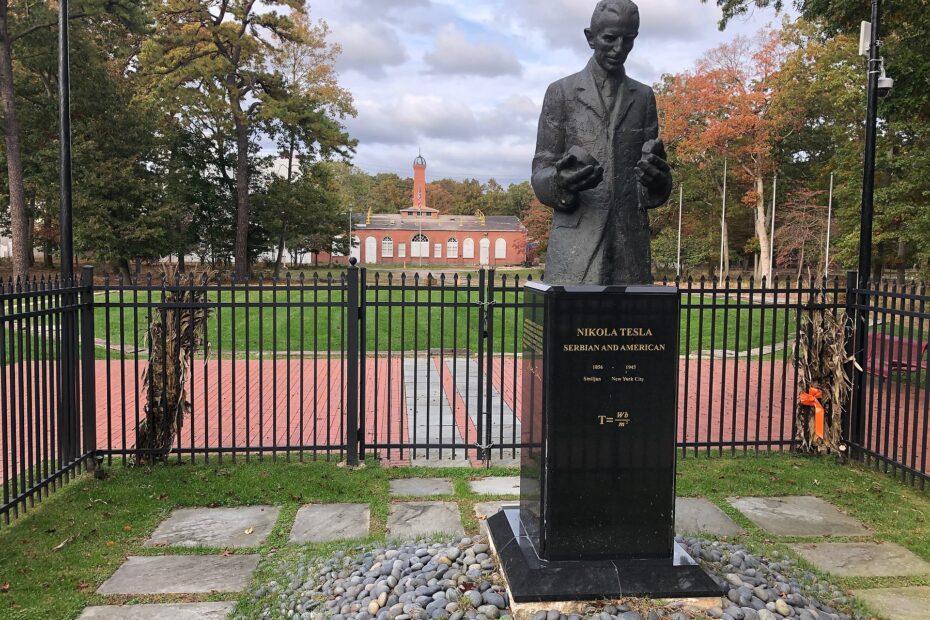 We are inspired at Emrod by Nikola Tesla’s work and his dream for a wireless energy system. Although he was not successful specifically in realising his vision, he planted an idea that captured many people’s imaginations, including ours.

We are often asked about the difference between Emrod and Tesla’s long-range wireless power transfer (WPT) technology. The science and technology behind these two systems are significantly different, conceptually and technically. Emrod has developed a uni-directional WPT system, transmitting power from one precise point to another. Tesla was developing an omni-directional WPT system, designed to transmit energy in all directions through the earth.

This blog describes one important technical difference between these two systems by comparing omni-directional and uni-directional WPT systems. 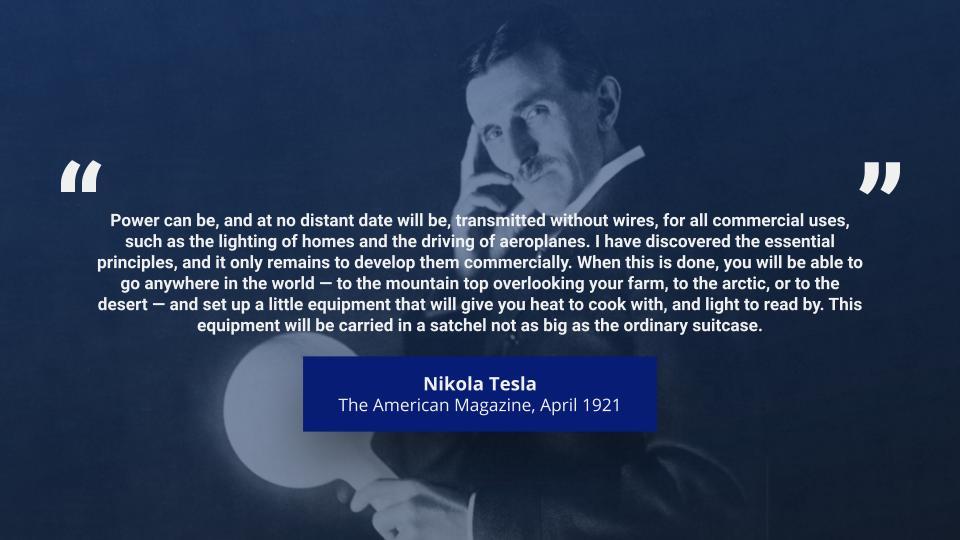 Nikola Tesla’s most famous invention was arguably the Tesla coil. This was the first known system that could wireless transmit electricity. The Tesla coil is a radio frequency oscillator that drives an air-core double-tuned resonant transformer to produce high voltages at low currents. [1] Tesla demonstrated the Tesla Coils ability to transmit power over short distances without connecting wire.

In 1901, after his success with the Tesla Coil, Nikola Tesla began working on a system to transfer larger amounts of electricity over long distances. He built the Tesla Tower (also known as the Wardenclyffe Tower), a system that fed 300 kW of power into a large coil connected to a 200-ft high mast. At the top of the mast was a 3-ft diameter ball at the top which resonated at 150 kHz and diffused power in all directions. The system was a vertical Tesla coil with a grounded base.

Tesla’s theory was that if he injected electric current into the Earth at just the right frequency he could harness what he believed was the planet’s own electrical charge and cause it to resonate at a frequency that would be amplified in “standing waves” that could be tapped anywhere on the planet to run devices or, through modulation, carry a signal. His system was based more on 19th-century ideas of electrical conduction and telegraphy instead of the newer theories of airborne electromagnetic waves, with an electrical charge being conducted through the ground and being returned through the air. [2]

There is no sound evidence of the Tesla Tower successfully transmitting sufficient power levels to make this long-range WPT technology viable for the intended application. Nevertheless, it was an important event for progressing the development of wireless technology.

There have been many breakthroughs in the century succeeding Tesla’s experiments and we now find ourselves at a time where commercially viable long-range WPT applications are a reality. At Emrod we have developed a commercially viable WPT system for transmitting power over long distances wirelessly and efficiently enough to be a viable alternative for power lines in certain use cases.

WPT is a large and broad field containing many different forms of technology and applications. When considering or comparing different systems, for example, Emrod and Tesla’s systems, there are a large number of variables to take into account. We address one of these variables in this blog.

The Factors of a Wireless Power Transmission System

There are many ways of transmitting power wirelessly, depending on the technology used to create, send and receive the transmitted waves. Given the application of the wireless power transfer system, there are certain compromises that need to be made in regards to the characteristics of the system. Such as the wavelength at the frequency of operation, the distance over which power is transmitted, the amount of power transmitted and the dimensions of the transmitter and receiver, just to name a few.

Energy harvesting is another example of the utilization of an omni-directional system. In 2017, The University of Washington developed a battery-free phone using radio frequency harvesting. The phone was powered by gathering and converting power from ambient radio signals transmitted by a base station up to 31 feet away.

Existing omni-directional microwave power technology can transmit only minimal amounts of power and the direction of transmission can not be controlled reliably. As the story goes, J.P. Morgan famously killed Tesla’s vision for wireless energy by asking “where do I put the meter?”. 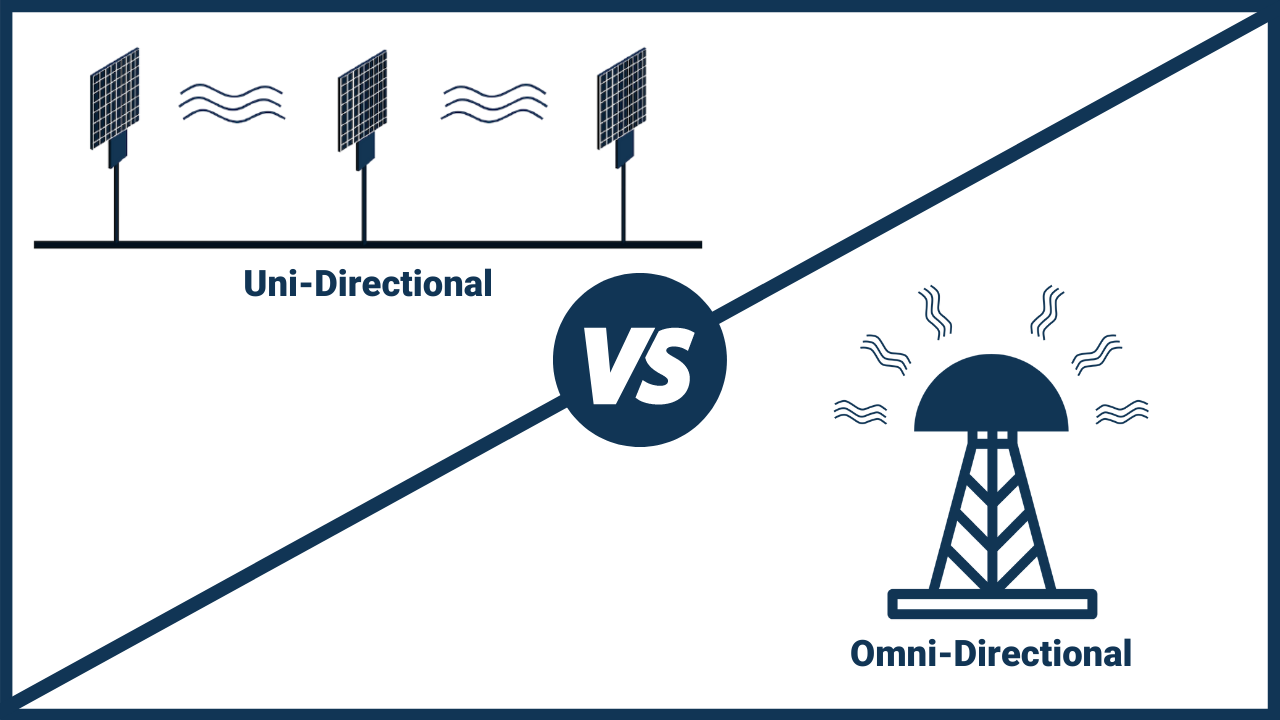 Uni-directional wireless power transmission is focused on one target, sending power from one precise location to another.

Emrod’s technology is categorised as uni-directional WPT. Power is transmitted directly from one transmitting antenna to a receiving antenna, as though it were travelling through a virtual wire.

This type of system allows for large amounts of power to be transmitted in a controlled and directed way, which is why it is suitable as an alternative solution to power lines.

Other examples of the applications of narrow beam WPT include powering drones in-flight, powering remote communities, and beaming power from space to earth. In 1964 and 1968 William C. Brown applied omni-direction WPT to a flying drone. Hiroshi Matsumoto successfully powered a small airplane in 1992. Many successful experiments have been completed since, with varying levels of power, distance and efficiency achieved.

Wireless power transfer is a wide-sweeping field within which there are many different applications and technologies. There are significant differences between the various technologies within this field which must be taken into consideration when comparing two systems and their applications. The characterisation we have covered in this article, omni-directional vs. uni-directional, describes whether a system transmits power without precise target detection (omni-directional) or from one defined point to another (uni-directional).

Nikola Tesla’s vision for wireless power is described as being “to collect and distribute energy from around the globe with a primary use being to power isolated homes”. The initial technology he developed to move towards achieving this vision, the Tesla Tower, was an omni-directional WPT system.

At Emrod, we have focused our efforts on developing a system that can transmit large amounts of power over long distances in a way that is efficient, reliable, safe and commercially viable as an alternative to power line infrastructure. Our system is unidirectional, sending power wirelessly through the air from a transmitting antenna to a receiving antenna through a column-like beam with built-in safety features. Using proprietary relay technology, Emrod’s system has the capability to transmit power over vast distances.

Although our technology is significantly different from what Tesla was working on, we are inspired by his work and share his vision of a wireless future. His inventions were foundational for many of the electronic technologies that have developed modern society into what it is today, including wireless communication technology. He opened up people’s minds to the possibilities of a world with long-range wireless energy. Now over a century later, it is becoming a reality.